“Hope, faith and freedom – mission of the Church more relevant than ever”. Un’intervista da “The Universe” 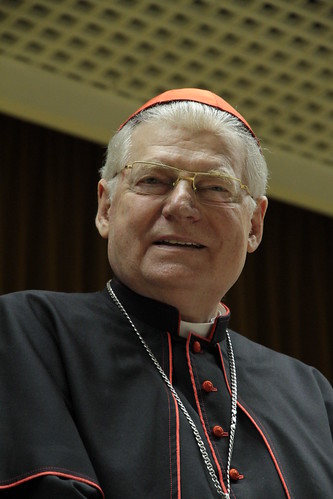 Gerry O’Connell speaks to the Patriarch of Venice, Cardinal Angelo Scola – son of a socialist truck driver and a profoundly Catholic mother. He is also a leading intellectual in the Italian Bishops’ Conference and one of the more creative and original thinkers in the College of Cardinals.

Q. What do you see as the main challenges facing the Catholic Church today?

A. I think the principal challenge, which the Church shares with every other social subject in the field, is the interpretation of the post-modern. The question is; have we, or have we not entered the post-modern world? Certainly the collapse of the Berlin Wall has marked a rather radical mutation that can be seen in certain macroscopic phenomena.

Indeed, what is happening in the Middle East is like a second phase of what happened in 1989. There is obviously a strong desire for freedom on the part of peoples on the world stage, and that comes with an urgent demand for real participation.

This has complicated even more that which I call the process of the mixing of civilizations and cultures; that is, a process of movement and displacement of peoples which will become even more radical in the coming decades. All this has made it made more urgent for us in Europe to gain a deeper knowledge of Islam.

Then there is the question of the progress of techno-sciences, especially in bio-engineering, cloning, bio-convergence, informatics, biology, molecular physics, neuroscience and so on. All these phenomena are producing a different kind of man and so the challenge for the Church is the same as for all humanity: What kind of man does the man of the third millennium wish to be?

Q. What is your view on this?

A. Some 10 years ago when I was in Munich I bought a copy of Die Welt and there was an entire page written by this young German philosopher of science named Jongen under the banner headline Man is only his own experiment!

It is clear that we are faced here with a framework that is radically different from that which prevailed up to the 1980s, and it seems to me that the Church, in this context, has to insist on the fact that the ‘I’ does not exist without relations. This is the point. Because it is from the ‘I’ that the dynamism of the truth, the good and the beautiful is documented within the human family and, in my view, this fact is irrepressible.

I think that we must value with much realism all the positive things that emerge from these major shifts and discoveries, while accepting the elements of contradiction that are found in every passage of civilization.

The challenges are at the anthropological, social, cosmological and ecological levels, and since the Church of Christ is the presence of a God who became incarnate and who has engaged, and continues to be involved with humankind, it has to respond to these challenges of humanity. The risk is that man thinks of himself as freed from every bond, and so as ‘a self-made man’.

This nullifies the exchange between the generations, it nullifies education in the proper sense of the term, and leads to many phenomena that we see in the anthropological transformations and ways of understanding sexuality, love, parenthood, work and so on.

It seems to me that in this context, the mission of the Church is more relevant than ever. Indeed, I believe that the Christian proposal is particularly relevant now, because if we read the Gospel we see it revolves around the theme of happiness and freedom. Jesus said that if you wish to be happy, come and follow me, and he who follows me will be truly free. It inserts the dynamic of truth, goodness and beauty within the horizon of happiness and freedom.

So when the Christian proposal is freed from the many things that weigh it down because of the contradictions and sins in the men and women of the Church, and is re-proposed in its youthful simplicity as an encounter with a humanity made whole by Christ, then it is more relevant than ever.

Q. What do you see as the strengths and weaknesses of the Church as it faces these challenges?

A. They are those which Benedict XVI has formulated at the beginning of his first encyclical – Deus Caritas Est – namely, that the nature of Christianity is a personal encounter with Christ. We see this clearly in those people who have encountered him and witness to the beauty of a humanity that has succeeded.

The weakness is the continuing existence of that which Paul VI denounced; the dualism between faith and life. This is evident when one does not experience how the relation with Christ impacts on one’s daily life, or how Church life is relevant to all this, and so one tends to conclude that the practice of the Christian life is useless, and one tends to put it aside.

The paramount task of the Church is to announce Christ in all the settings of human existence and to simplify the life of the Christian community in the parishes and dioceses so that they may be better suited to people today, especially to the young, to the people who have a family and work. It’s a substantial problem to regain the link between faith and life, to understand how the faith is relevant to my life. This requires the way of relations; it cannot be done by oneself alone, it requires a living community of people who can communicate their experience.

Q. You have visited many Churches in the southern hemisphere and described them as “beacons of hope”. What do you mean?

A. These are Churches of the first evangelisation, and they maintain a vitality and freshness in which the primacy of life renewed by Christ is palpable.

Then, too, one sees a spirit of joyfulness in all the African Churches, where the liturgy is often positively incarnated, and where the depth of fraternal relations in Christ is tangible, notwithstanding the problems and contradictions that all people have. It is particularly striking to see how the experience of the mystery is an experience of joy.

I have seen this many times in Africa, I have seen it in Asia, in the Philippines, in Brazil and other parts of Latin America, although these situations are quite different.

So I consider these Churches as signs of hope because I think they can rejuvenate the entire fabric of the Catholic Church. But it remains to be seen how the themes we have spoken about earlier will impact on them.

Q. Many of these Churches face the problem of how to relate to other religions. You have given much attention to this question. Do you think the Church has grasped this problem sufficiently?

A. The Catholic Church, in my view, particularly since the Second Vatican Council and also because it has given a very high importance to the practice of ecumenism, is facing the question of inter-religious dialogue with great realism. But it takes time to find a proper balance.

I recall an affirmation of the then Cardinal Ratzinger which was more or less this; inter-religious dialogue is an intrinsic experience of the Christian Church, it is not something contingent, imposed from outside. It is not imposed by the fact that today we have 15 million Muslims in Europe, though this makes it more urgent for us to engage in inter-religious dialogue.

An effective dialogue requires that I engage my faith in a dynamic way. It implies an identity, but a dynamic identity, and so we return to what we spoke about earlier: What is Christianity? The event of Christ, by which he gives himself as a gift to mankind to be the way, the truth and the life, is open to dialogue at 360 degrees. But if I reduce Christianity to a question of doctrine only, then I reduce it to a dialogue of a purely speculative kind.

Certainly, Christianity implies a doctrine and a moral teaching, but they are incarnated in the life of a person and in the life of a community. Therefore, if I practice the Christian life for what it is – ‘the good life’ which the Gospel documents and witnesses to, then I can go and dialogue with everyone.

It’s sufficient to go to India where there are many mixed marriages between Hindus and Christians and there, one sees how people practice inter-religious dialogue in daily life, for example, in the way husband and wife love each other, or in the way they educate their children.

On the other hand, it is also necessary to have reflection of a theological and cultural kind such as is happening, indeed flourishing, in many places today. One example of this is the small Oasis experience which we started here in Venice which is dedicated above all to the reciprocal knowledge.

The first step in dialogue is knowledge, getting to know the other. This is fundamental because, as it is evident today, if one asks an Italian or European Catholic “what is Islam?”, more than 90 per cent would not know how to answer. I’m sure the same would be true vice versa for Muslims, if we question them about Christianity.

It seems to me that, generally speaking, as Christians we are well on the way in terms of inter-religious dialogue, but it is an epochal question and requires a lot of time.

Q. In Rome many people – in the Vatican and outside – are saying that after the Polish and German popes, and all the crises of this pontificate, we need an Italian pope once again to put order in the Church.

A. Well, we’ll see. First of all, the Holy Father is very well and is doing his task in a formidable way, giving us a teaching of the highest level that is arousing enormous and impassioned dialogue throughout the whole world. Second, he is renewing the pastoral work of the Church through rooting it in the liturgy and the sacraments.

I do not at all agree with those who say that this is a papacy which has generated crises. There have been moments when he has had to take on his own shoulders great problems of other men of the Church, and he did so by taking the lead, without ever pulling back.